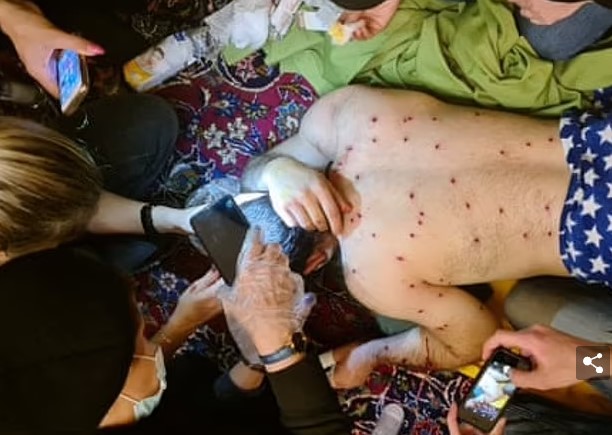 Iranian security forces are targeting women at anti-regime protests with shotgun fire to their faces, breasts and genitals, according to interviews with medics across the country.

Doctors and nurses – treating demonstrators in secret to avoid arrest – said they first observed the practice after noticing that women often arrived with different wounds to men, who more commonly had shotgun pellets in their legs, buttocks and backs.

While an internet blackout has hidden much of the bloody crackdown on protesters, photos provided by medics to the Guardian showed devastating wounds all over their bodies from so-called birdshot pellets, which security forces have fired on people at close range. Some of the photos showed people with dozens of tiny “shot” balls lodged deep in their flesh.

The Guardian has spoken to 10 medical professionals who warned about the seriousness of the injuries that could leave hundreds of young Iranians with permanent damage. Shots to the eyes of women, men and children were particularly common, they said.

One physician from the central Isfahan province said he believed the authorities were targeting men and women in different ways “because they wanted to destroy the beauty of these women”.

“I treated a woman in her early 20s, who was shot in her genitals by two pellets. Ten other pellets were lodged in her inner thigh. These 10 pellets were easily removed, but those two pellets were a challenge, because they were wedged in between her urethra and vaginal opening,” the physician said. “There was a serious risk of vaginal infection, so I asked her to go to a trusted gynaecologist. She said she was protesting when a group of about 10 security agents circled around and shot her in her genitals and thighs.”

Traumatised by his experience, the physician – who like all medical professionals cited in this article spoke on condition of anonymity for fear of reprisals – said he had a hard time dealing with the stress and pain he witnessed.